Coming every Sunday, Hodler’s Digest will help you track every single important news story that happened this week. The best (and worst) quotes, adoption and regulation highlights, leading coins, predictions and much more — a week on Cointelegraph in one link.

Bitcoin’s price has hardly moved an inch in the last six weeks — barely moving 2% in either direction from its average. This long period of stagnation resembles what happened in early 2017. BTC stayed around $900 for the first three months of the year, which was followed by an explosive 300% move in the second quarter. Of course, Bitcoin is facing stubborn levels of resistance before it clears $10,500 — and this week, BTC’s correlation to the S&P 500 reached an all-time high. On Thursday, a bad day for stocks saw Bitcoin abruptly drop below $9,200. Key metrics do show that institutional interest in crypto is high and rising, but even some of the world’s biggest Bitcoin bulls are sounding a note of caution. Mike Novogratz, who wrongly predicted BTC would hit $20,000 by the end of 2019, has said he doesn’t recommend investors putting the majority of their funds in crypto. “My sense is that Bitcoin way outperforms gold, but I would tell people to have a lot less Bitcoin than they have gold, just because of the volatility,” he told CNBC on Tuesday.

Weird, weird, weird news this week: Dogecoin is back from the dead. The novelty crypto asset leaped 50% in 24 hours this week thanks to a viral TikTok challenge encouraging its young user base to pump the coin. The most popular video under the hashtag #DogecoinTiktokChallenge has amassed more than 500,000 views — and in it, the user appears to describe a classic pump scheme, saying: “Let’s all get rich! Dogecoin is practically worthless. There are 800 million TikTok users. Invest just $25. Once the stock hits $1, you’ll have 10 grand [$10,000]. Tell everyone you know.” The frenzied action prompted the owner of the @Dogecoin Twitter account to warn its followers. On Wednesday, the account tweeted: “Be mindful of the intentions people have when they direct you to buy things. None of them are in the spot to be financially advising. Make choices right for you, do not ride other people’s FOMO or manipulation. Stay safe. Be smart.” Bitfinex listed DOGE in response to the demand — with “how to buy Dogecoin” overtaking “how to buy Bitcoin” on Google Trends. DOGE’s price has cooled substantially since hitting highs of $0.0054 on Wednesday — falling 32% to $0.0036. Looks like it’s a long way off before hitting $1. 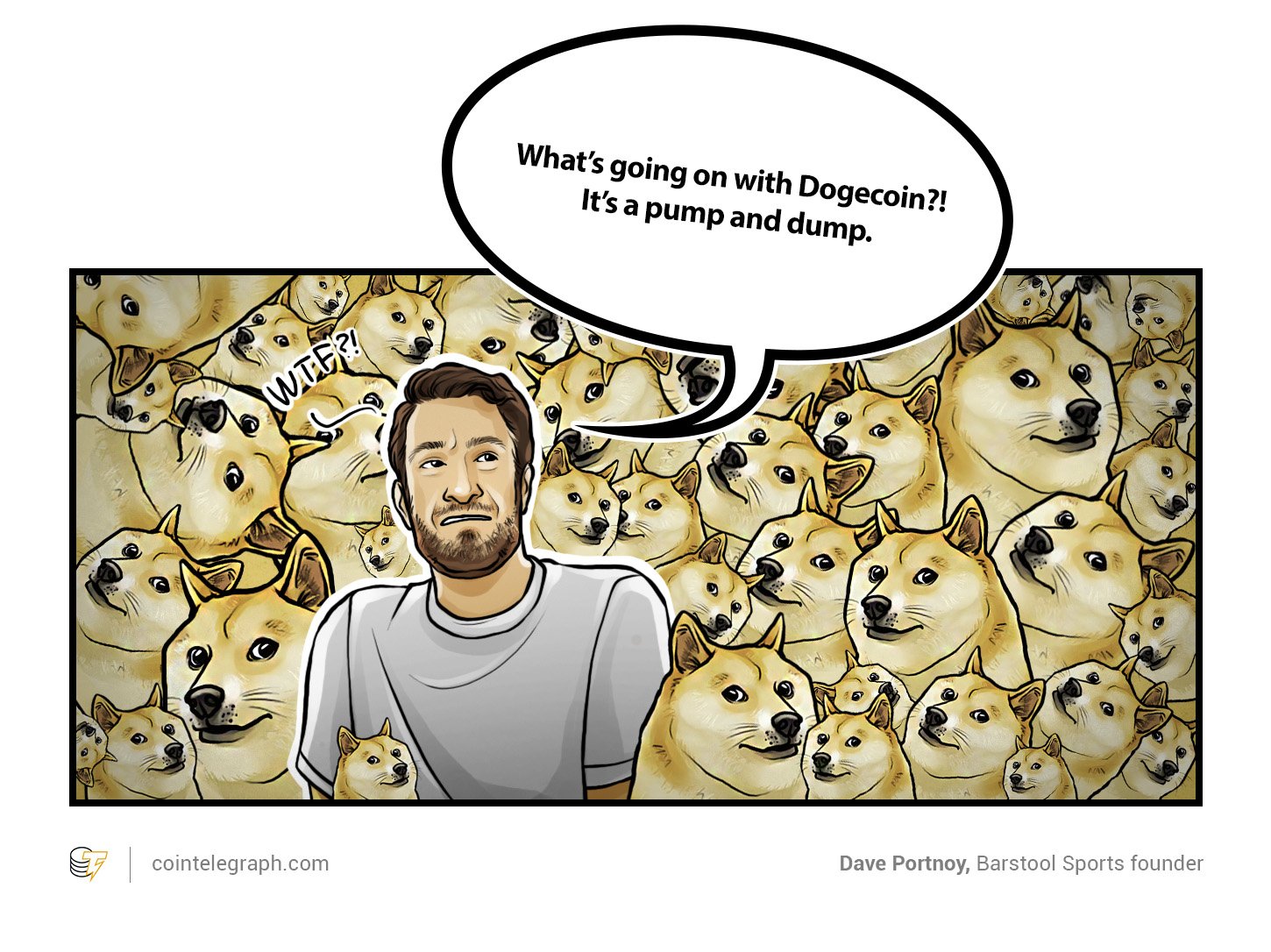 Coinbase is reportedly preparing to list on the U.S. stock market as early as this year. If successful, it would be the first crypto exchange to make its debut on traditional markets. But hurdles do lie ahead, and Coinbase would need the green light from the Securities and Exchange Commission first. According to Reuters, the plans are rather fluid at the moment and subject to change — but the company has been in talks to hire investment banks and law firms. Should the SEC give Coinbase the go-ahead, it would likely represent a landmark victory for crypto advocates vying for mainstream endorsement. Coinbase was valued at more than $8 billion during its last private fundraising round in 2018. It’s thought the exchange isn’t pursuing a traditional initial public offering where new shares are sold; instead, it’s exploring a direct listing where existing investors aren’t bound by lock-up restrictions.

Monetary historian: “Libra will never see the light of day”

This news will be music to Facebook’s ears… not. Monetary historian Barry Eichengreen has declared that “Libra is an interesting idea that will never see the light of day.” Speaking at the virtual Unitize conference, the UC Berkeley professor warned that the stablecoin sector is largely ignorant of monetary economics — and claimed Libra faces too many “insoluble” problems and too much resistance from governments. Eichengreen said his work had led to invitations “to a series of lunches at excellent San Francisco restaurants with the founders and funders of prospective stablecoins.” But he added: “My conclusion was that my luncheon companions knew all about blockchain, but they didn’t know much about monetary economics.” According to Eichengreen, many executives were unaware of past speculative attacks on pegged exchange rates and are struggling to grapple with the “big uncertainties” that need to be resolved in order for projects to get off the ground.

A blockchain browser that was forked from the open-source Brave browser has rebranded itself after receiving legal threats. Braver Browser, which was launched in June following reports that Brave was auto-filling affiliate links, has now confirmed it will be known as the Bold Browser. In a tweet, the project said: “We are immediately changing the name and removing all association to ‘the browser that shall not be named.’” Brave co-founder and CEO Brendan Eich was unapologetic about the move, warning there’s “no free riding on our servers” and that his company will defend its trademarks.

For more info on crypto prices, make sure to read Cointelegraph’s market analysis.

“Tether routinely assists law enforcement in their investigations... Through the freeze address feature, Tether has been able to help users and exchanges to save and recover tens of millions of dollars stolen from them by hackers.”

“Most alts should gain on Bitcoin in near future.”

“Libra is an interesting idea that will never see the light of day.”

“2020 need not be a repeat of 2019. Proper levels of investment in people, processes and IT would result in significantly fewer ransomware incidents and those incidents which did occur would be less severe, less disruptive and less costly.”

“We are immediately changing the name and removing all association to ‘the browser that shall not be named.’”

“With global currency vols off historic lows and a huge wave of new debt, fireworks are coming to the currency market.”

“Make choices right for you, do not ride other people’s FOMO or manipulation. Stay safe. Be smart.”

Prediction of the Week

Coinbase analyst Max Bronstein has predicted that “fireworks” are coming to the global currency market — and a spike in volatility might largely benefit the price of BTC. He said: “A lot has been said on BTC’s performance during bouts of equity volatility, but not as much on how BTC would perform during bouts of FX/currency volatility. With global currency vols off historic lows and a huge wave of new debt, fireworks are coming to the currency market.” Bronstein said the global monetary system was fragile even before the pandemic hit the international economy, with many countries at risk of seeing their currencies decline in value. He believes Bitcoin could benefit as fears of hyperinflation and devaluation hit, adding: “In a regime where nearly every government has an incentive to debase their currency, few monetary systems stand to benefit as much as Bitcoin does. Never before has an open-source competitor to fiat currency been so needed.”

FUD of the Week

An unusual row has been brewing this week that has the potential to be bad news for crypto companies. Although the “.io” domain was formally the country code top-level domain designation for “Indian Ocean,” the extension was acquired on the open market by a U.K.-based firm in the 1990s. The U.K. government receives an undisclosed share of revenue from sales of .io domain names, in what a legal complaint claims is part of the ongoing colonial exploration of the economic property and livelihood of those in the region. The complaint notes that “thousands of crypto asset platforms” that “generate vast sums of unregulated and untaxed revenue” use .io — and accuses the U.K. of tolerating “massive criminality” in overlooking the existence of “criminal entities.”

New York’s Supreme Court has ruled that the Bitfinex crypto exchange and sister stablecoin company Tether must face claims they concealed the loss of corporate and client funds. The state’s Attorney General Letitia James alleges that the loss of $850 million was hidden. Bitfinex asserts that its funds were deposited with Crypto Capital — a Panamanian firm accused of providing shadow banking services to virtual currency exchanges — before being seized by government authorities in various countries. They are working to recover the money. The court rejected the firms’ claim that the court does not have jurisdiction over Bitfinex — noting several of its staff work in New York, and USDT had been used by local residents. In other news this week, it emerged that Tether has blacklisted 39 Ethereum addresses worth $46 million in USDT. General counsel Stuart Hoegner said: “Tether routinely assists law enforcement in their investigations... Through the freeze address feature, Tether has been able to help users and exchanges to save and recover tens of millions of dollars stolen from them by hackers.”

Telegram will shut down the TON testnet by August 2020

Support for Telegram Open Network’s testnet is going to be discontinued by the start of August. Participants are being encouraged to save all of their relevant testing data and stop their testing processes. Even though the testnet is going to be turned off in less than a month, users will still be able to continue their experimentation by installing their own validators. Telegram launched the TON testnet on Sept. 6, 2019, ahead of an anticipated launch on Oct. 31 last year — but the plans were never realized because the SEC suddenly deemed the company’s $1.7-billion ICO illegal in mid-October. After a long-running legal battle, Telegram agreed to shut down its TON project, as well as return $1.2 billion to investors in line with a court-approved final settlement.

The close interaction between traditional finance and regulators is the key element in the development of the cryptocurrency industry, Alex Axelrod argues.

CBDCs are one of the hottest topics in the fintech space, but as their inception comes closer, serious privacy concerns come with it. António Madeira has the story.

How the U.S. and Europe are regulating crypto in 2020

Cryptocurrencies have been around for more than 10 years, but the legal status of Bitcoin and other altcoins remains unclear. Elena Perez looks at the state of play right now.