The U.S. markets have rallied sharply from their March lows, led by the tech sector and Fed injections designed to hold up the ailing economy.

Markets across the globe have also joined the party as a steady economic recovery from the coronavirus pandemic picks up steam.

The fast-paced rally in global stock markets has pushed the Buffett Indicator into the bubble territory, which suggests that the markets might be overheated in the short-term.

Similarly, gold has seen a sharp rally in 2020 and last week the asset reached a new lifetime high. Silver also followed suit and is trading near multi-year highs.

This suggests that traders have been diversifying their portfolio into various assets to protect against the debasing of fiat currencies.

These circumstances are also favorable for Bitcoin (BTC), which has rallied sharply from its March lows.

However, the biggest cryptocurrency is trading well below its all-time highs, which signals that if the bullish trend continues then there is plenty of potential upside.

Therefore, even if stocks and gold correct, Bitcoin could behave as an uncorrelated asset during that period.

The bulls purchased the dip on Aug. 2 but they are facing resistance close to the overhead zone of $12,113.50–$12,304.37. The BTC/USD pair has formed a pennant, which usually acts as a continuation pattern.

A breakout and close (UTC time) above the pennant will be the first sign that bulls have gained the upper hand. The target objective of such a breakout is $14,756. However, as the overhead resistance of $12,304.37 is close by, traders can wait for the price to sustain above this level before turning positive.

The bears are likely to pose a challenge at $13,000 but that level is likely to be crossed. However, at $14,000 a minor consolidation or a correction is possible.

A break below this level will be the first sign that bears are making a comeback. If the $10,000 level cracks, the correction is likely to deepen. 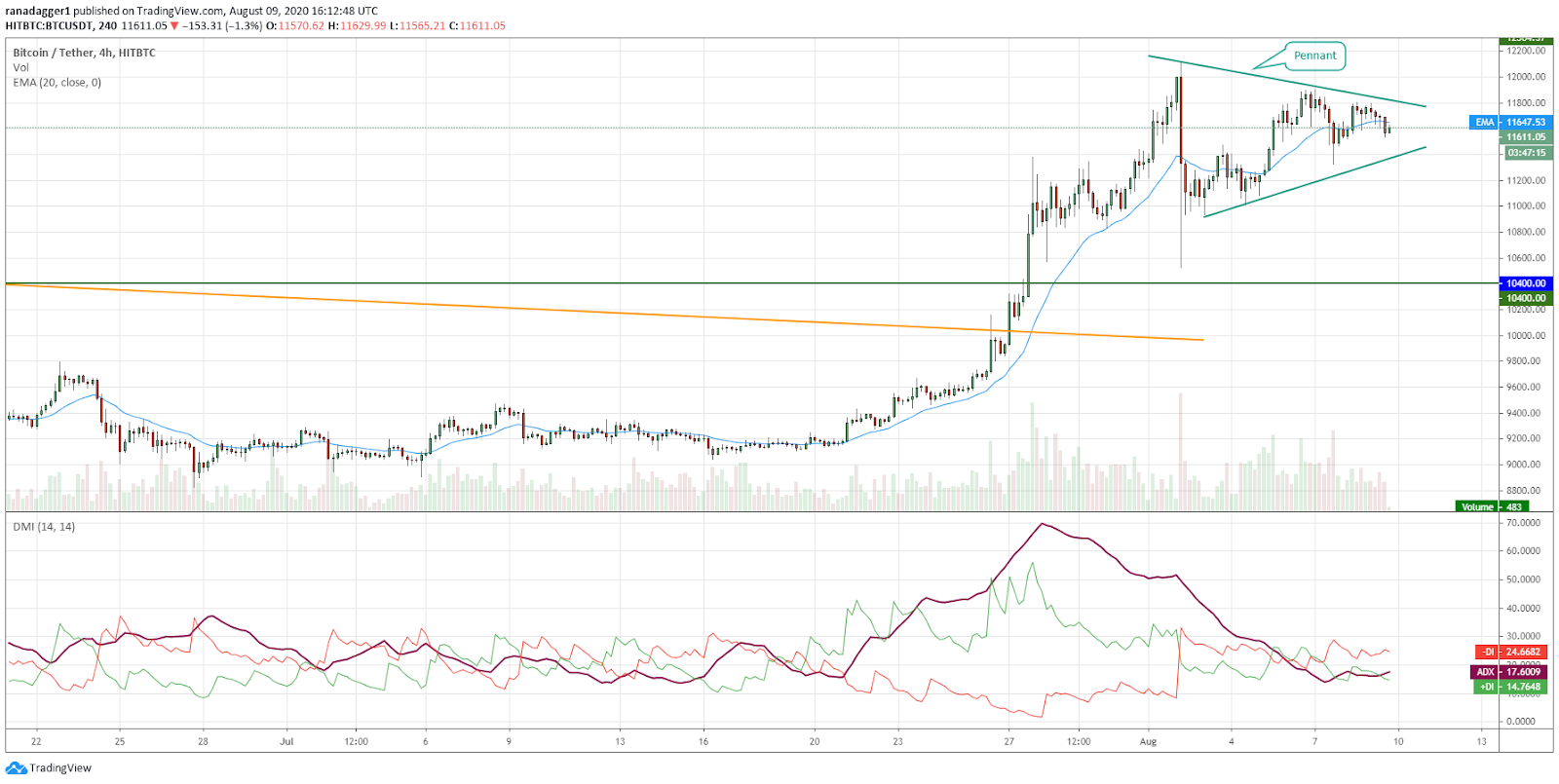 The ADX on the 4-hour chart has dropped to 17.6 level and the +DI and -DI are close to each other, suggesting a range-bound action in the short-term.

A breakout and close (UTC time) above the pennant will signal strength. However, the bears are unlikely to give up without a fight. They will again attempt to stall the up move in the $12,113.50–$12,304.37 zone.

Ether (ETH) is currently consolidating in a strong uptrend, with the ADX above 59 levels. The bulls have not allowed the price to dip below the $366 support, which shows that traders are not booking profits in a hurry. 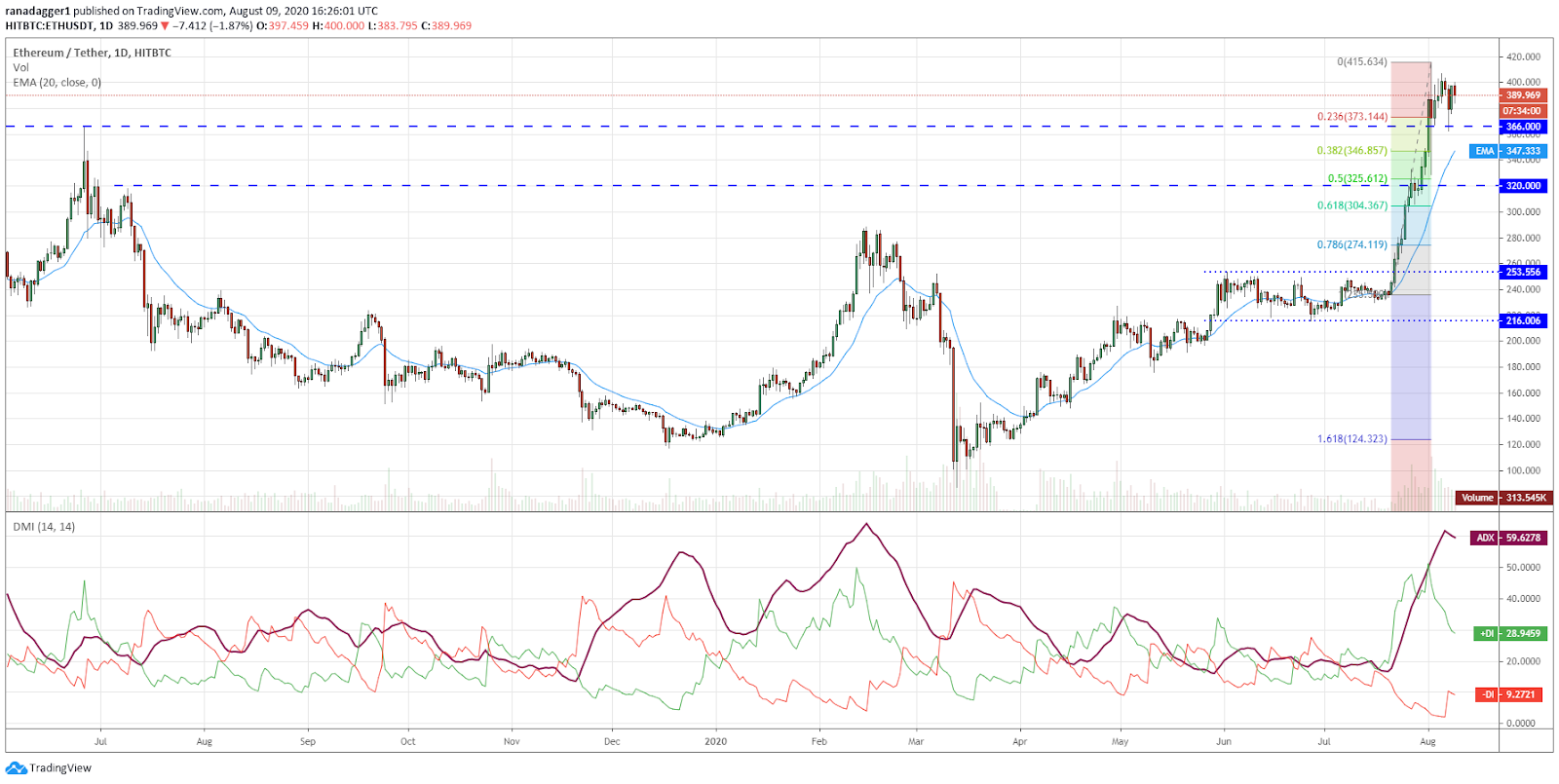 After the strong rally, if the ETH/USD pair does not give up ground, it is a sign that traders expect the uptrend to resume. In this case, a breakout and close above $415.634 will indicate the possible start of the next leg of the up move.

The first target to watch out on the upside is $480 and above it the rally can extend to $542. However, instead of the breakout, if the bears sink and sustain the price below $366, a drop to the 20-day EMA ($347) is possible. If the pair rebounds off this support, the bulls will attempt to resume the uptrend.

If the bears sink the price below the 20-day EMA, a drop to the next support at $320 is possible.

The deeper the pullback, the longer time it will take for the next leg of the uptrend to begin. A break below $320 will indicate that the advantage is with the bears.

The 4-hour chart shows a symmetrical triangle formation, which generally acts as a continuation pattern. The ADX has dipped below 18 and the +DI and -DI are close to each other, suggesting a consolidation in the short-term.

If the bulls can push the price above the triangle, it will indicate strength but the momentum is likely to pick up only after the price sustains above $415.634.

On the other hand, if the bears sink the price below the triangle, it will suggest profit booking by the bulls and will increase the possibility of a deeper correction.

Currently, the XRP/USD pair is correcting the uptrend as short-term traders book profits. This could drag the price to $0.275649, which is the 38.2% Fibonacci retracement level of the most recent leg of the up move. Below this level, the next support is likely to be the 20-day EMA ($0.264).

If the pair rebounds off either support, it will suggest that the bulls are buying the dips. If they can push the price above the flag, it will be the first sign that buyers have overpowered the sellers.

This bullish view will be invalidated if the bears sink the price below the flag. Such a move could signal a deeper correction.

The ADX on the 4-hour chart has dropped to about 21 level and the price is consolidating inside a symmetrical triangle, which suggests a balance between the bulls and the bears.

If the bulls can push the price above the triangle, a move to $0.326113 is possible. A break above this level might signal the resumption of the up move.

Conversely, if the bears sink the price below the triangle, a deeper correction to the 68.2% Fibonacci level of $0.244472 is possible.

A break below this support could result in a complete 100% retracement of the most recent leg of the up move, dragging the price down to $0.194008.

Monero (XMR) hit an intraday high of $96.5594 on Aug.6, which met the target objective of $95 as suggested in an earlier analysis. The rally of the past few days has pushed the ADX to above 54 levels, which suggests a strong trend. 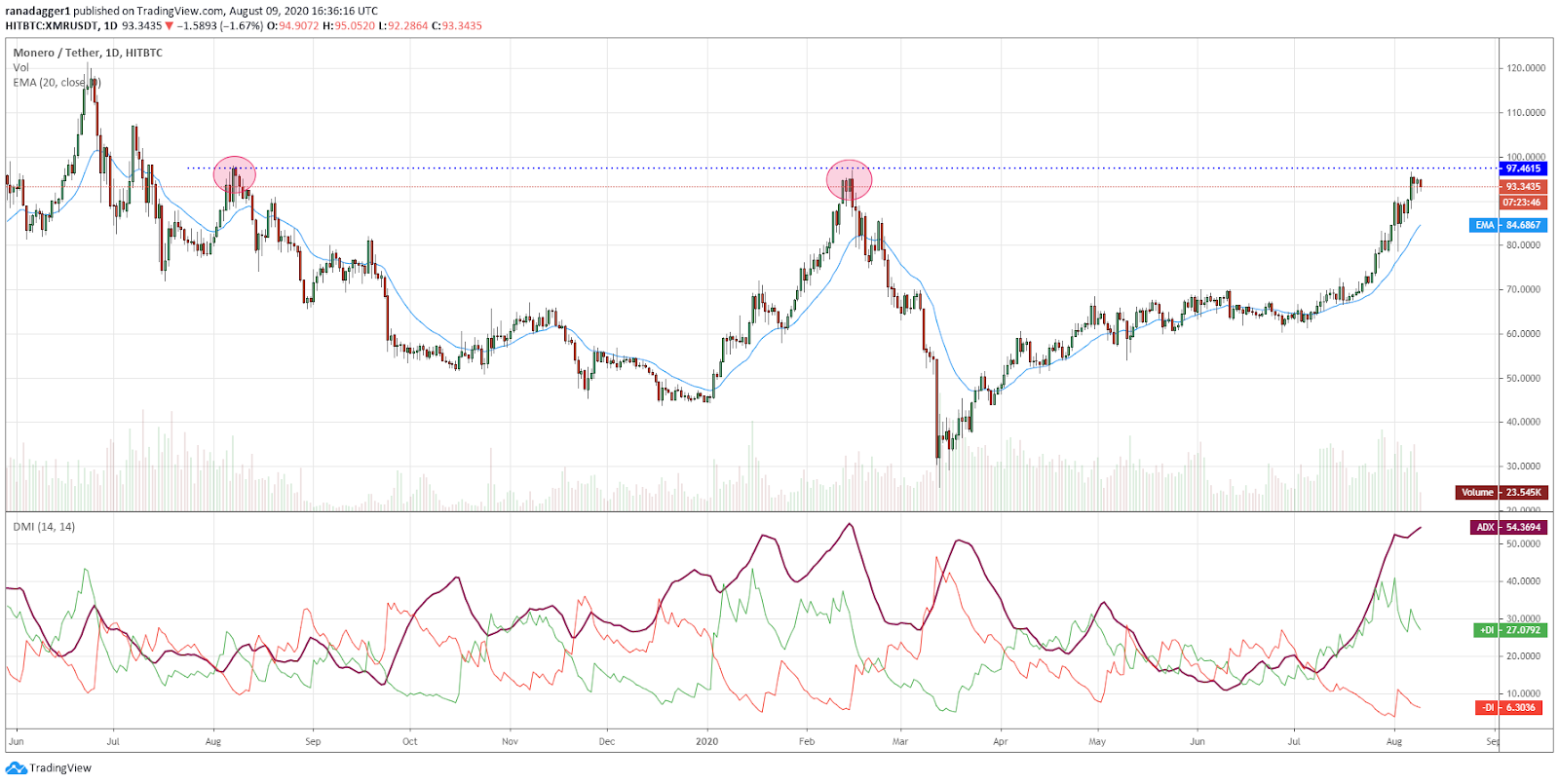 During two previous occasions (marked via ellipses on the chart) the XMR/USD pair had reversed direction from close to the $97.4615 level. Hence, the bears might again mount a strong defense at this resistance.

However, the pair has formed two successive inside day candlestick patterns in the past two days, which suggests uncertainty among the bulls and the bears about the next directional move.

A breakout and close (UTC time) above $97.4615 is likely to resume the uptrend. The next target objective is $121, with a minor resistance at $107, which is likely to be crossed. Traders can turn positive after the price sustains above $97.4615.

Conversely, if the bears sink the price below $90, a deeper correction to the 20-day EMA ($84) is possible.

The ADX on the 4-hour chart has dropped to below 15 levels, and the +DI and the -DI are close to each other, suggesting a balance between the bulls and the bears. The 20-EMA is also flattening out, which is another indication of a consolidation.

A breakout of $97.4615 will signal the likelihood of the start of the next leg of the uptrend while a break below $90 will indicate that the bears are making a comeback. 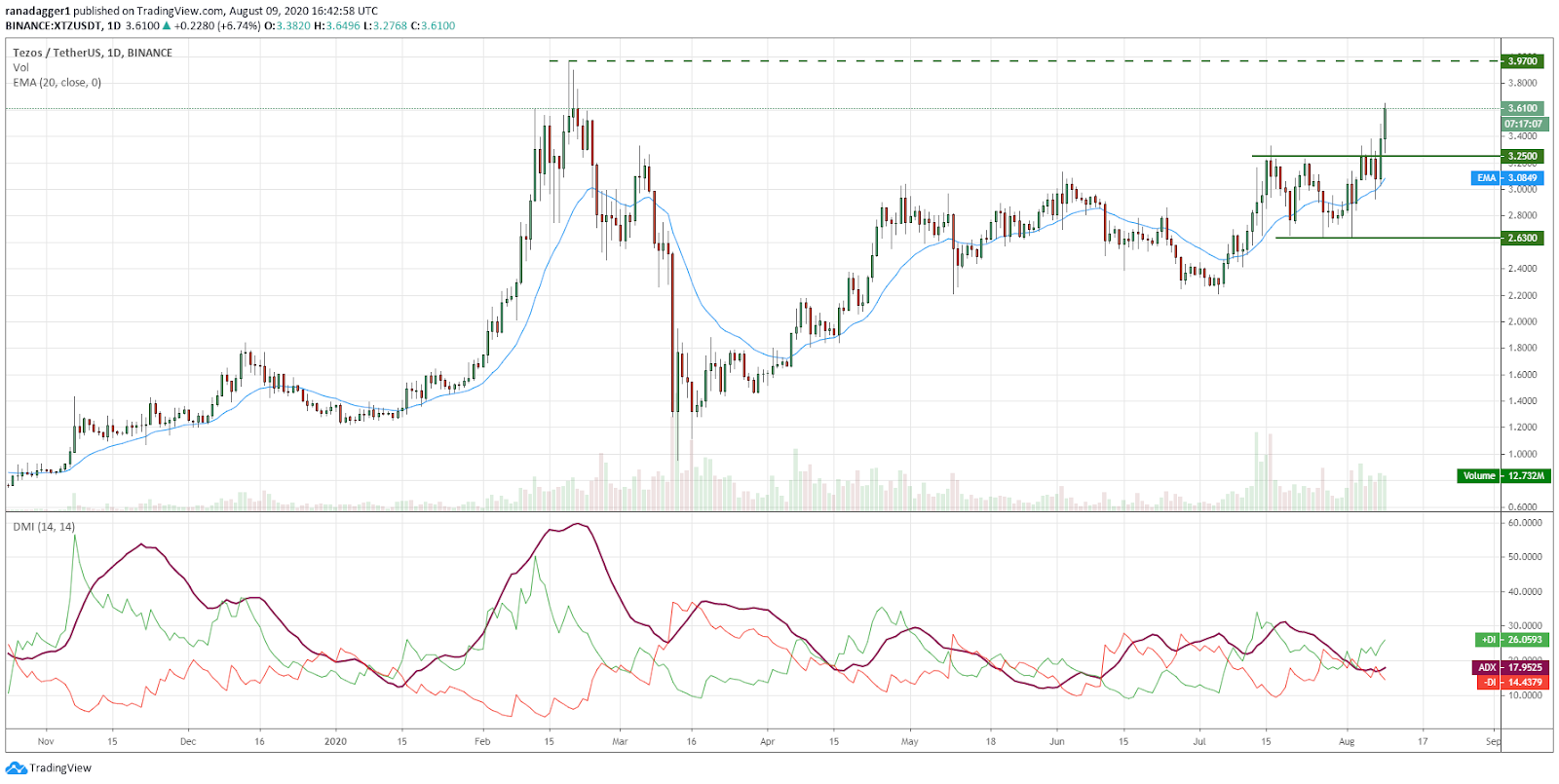 Currently, the ADX is close to 18 levels, which suggests that the trend has still not picked up strength. The bears will make an attempt to drag the XTZ/USD pair back below $3.25. If they succeed, the pair could remain range-bound for a few more days. 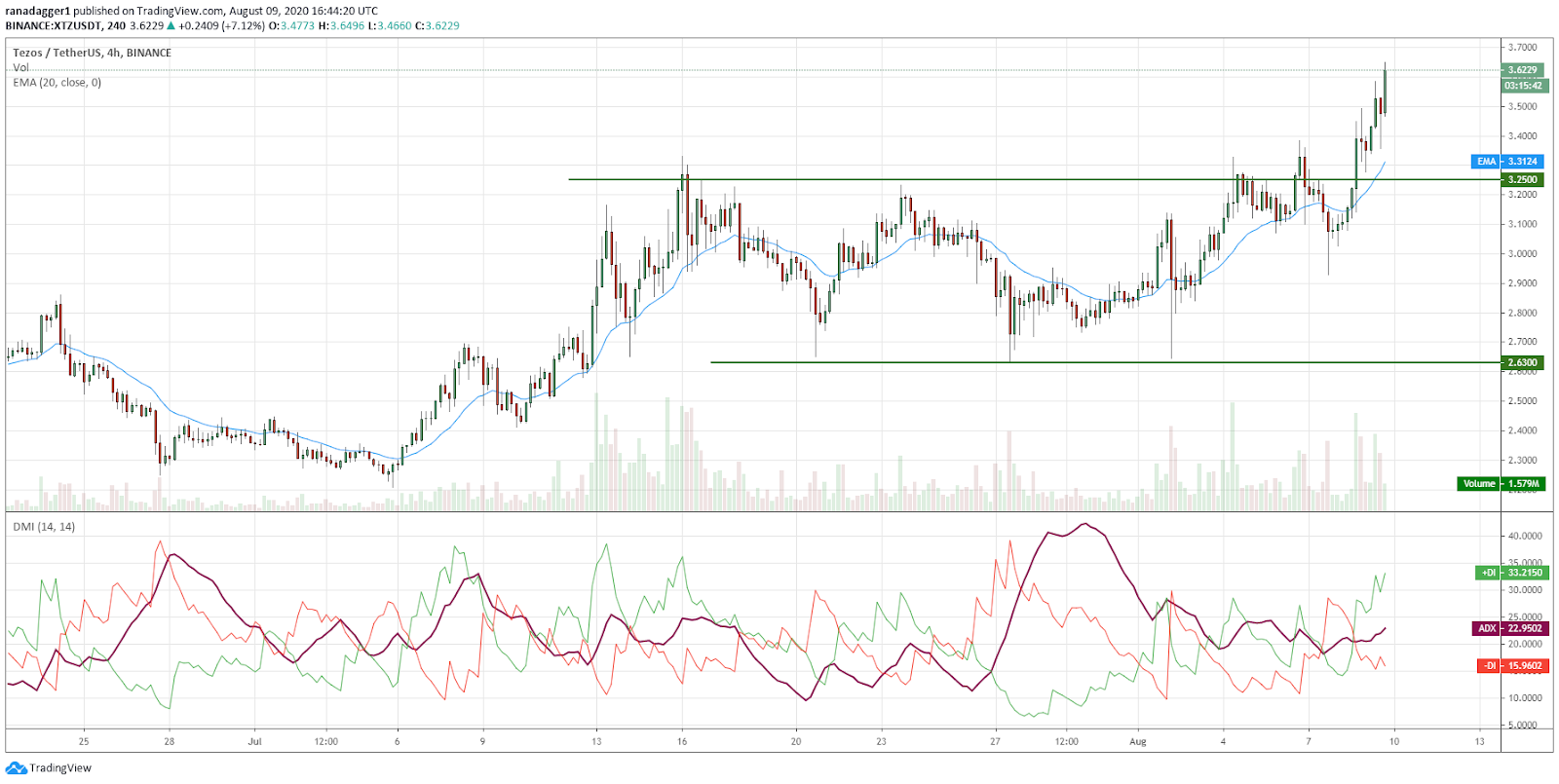 The 4-hour chart shows that after two failed attempts, the bulls have finally managed to sustain the price above the range. The 20-EMA has turned up, which suggests that the bulls have the upper hand.

If the bulls purchase the retest of the $3.25 support, it will be a positive sign and will indicate that the sentiment is to buy the dips. A strong bounce off this support could offer a low-risk entry opportunity to the traders who are bullish.

Conversely, if the bears sink the price back below $3.25, then it will indicate that the current breakout was a bull trap.