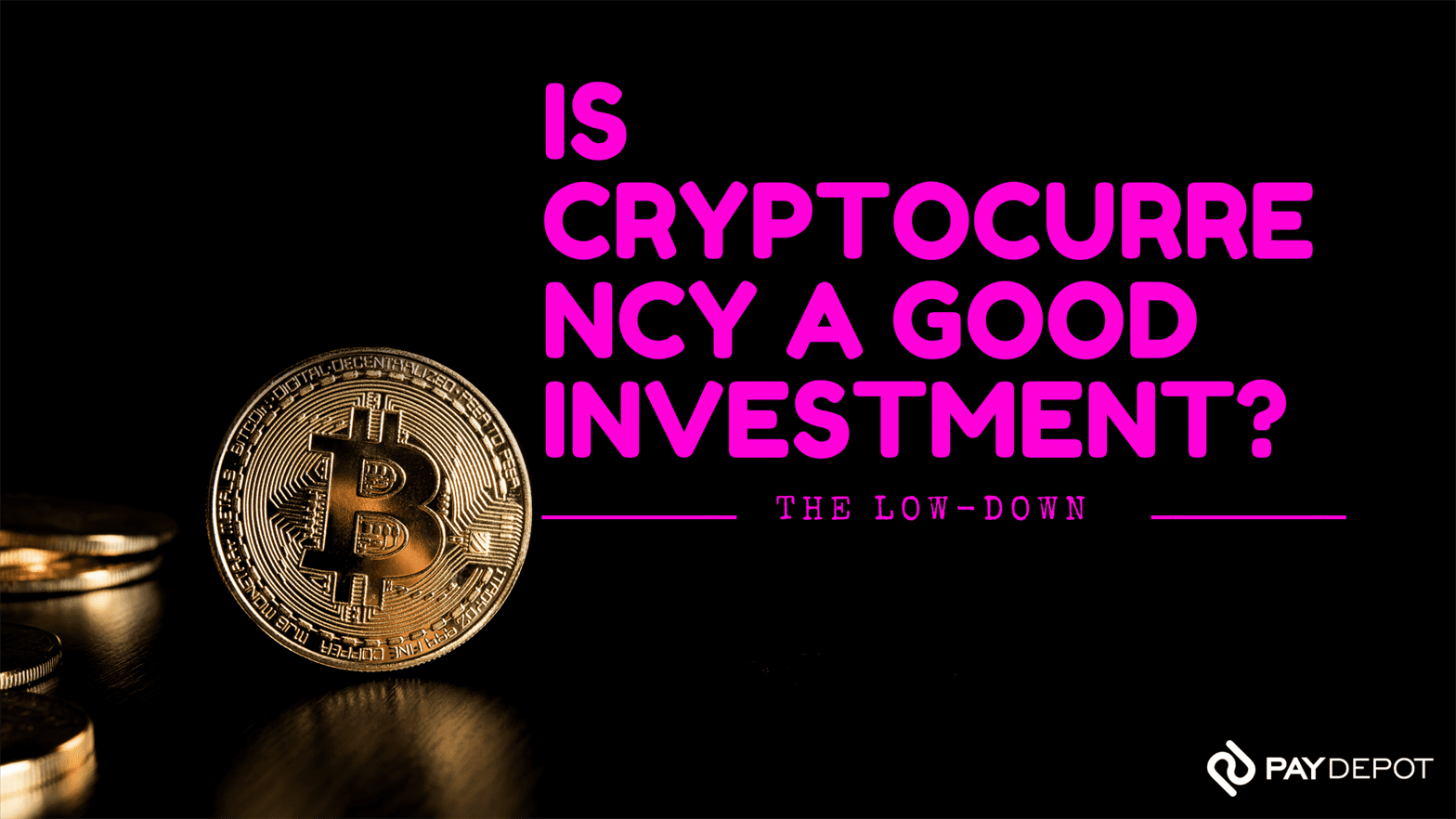 Is Cryptocurrency a Good Investment?

If you haven’t been living under a rock for the past decade, you have probably heard of cryptocurrency. Bitcoin, Ethereum, Dogecoin … at first, they seemed like a kooky sideshow to the finance game, but now they seem like the main event.

Are these people rich? Are these digital returns somehow fake? There doesn’t seem to be any money there … is there?

We on the Pay Depot team want to cut through the noise and help you make the best investment decisions. Is cryptocurrency a good investment, or isn’t it?

Markets are still coming to terms with what cryptocurrency even is. There’s little history to dictate what we might expect for the future, few analogies that hold up to scrutiny, and no way of knowing what kind of regulations might come down from governments. All this uncertainty serves to muddy the future of crypto as an investment.

The best we can do comes to an understanding of what cryptocurrency is, what makes it valuable, and the potential risks and rewards of committing your hard-earned money to cryptocurrency as an investment.

Cryptocurrency is a digital asset. By digital, we mean “ones and zeros.” Computer code. There are no actual coins or banknotes. Cryptocurrencies only exist as software.

How can a currency be made from computer code? Cryptocurrencies are built on a technology called Blockchain.

A blockchain is a form of digital record-keeping that is decentralized. When a blockchain is created, no one person or entity can control it. The blockchain exists diffused over many computer servers. In effect, this makes a blockchain nearly impossible to falsify. An anomaly on one server would be immediately disproved by all the other versions of the blockchain.

This security gives cryptocurrency integrity. Compare it to gold or silver. If you cut a gold coin in half, it is still the same amount of gold; it can be melted down to remake the coin. Similarly, it is impossible to split a cryptocurrency coin away from the blockchain.

By being decentralized and secure, cryptocurrencies tend to be anonymous. Transactions in cryptocurrency cannot be traced back to the payor or payee. In an unhackable format, the digital ledger records that a transaction was made — not who made it. As we will see, this has profound legal and liability implications.

While blockchain is secure in theory, several high-profile hacks and fraud attempts have undermined the reputation of cryptocurrencies for being faultlessly secure.

A Brief History of Cryptocurrency

The first cryptocurrency appeared seemingly out of nowhere. In 2009, The Bitcoin Manifesto was published online under the pseudonym “Satoshi Nakamoto.” To this day, no one really knows who wrote the manifesto. It is one of the biggest mysteries of the tech world.

The manifesto described both the cryptocurrency bitcoin and the blockchain technology that made it a reality.

Due to its anonymity, bitcoin became the key currency for dark web exchanges like the Silk Road, key hubs for the online sale of illegal drugs. Dark web drug sales and other criminal activities became a focus of worldwide law enforcement, with cryptocurrencies like bitcoin a focal point.

However, libertarian and anarchist idealogues praised cryptocurrencies as a form of money decoupled from the corrupting influence of any state or government. These “fiat” currencies were subject to the whims of politicians, while cryptocurrencies responded only to supply and demand.

Large companies like Tesla, Square, and PayPal have committed assets to cryptocurrencies, while the UK commissioned a study of the potential role of cryptocurrency in its monetary policy.

For all this talk of a $2 trillion market cap, it’s worth pointing out that we’re talking about ones and zeros on computer servers. How does computer code become valuable?

Everything that has value — stocks, bonds, real estate, commodities, etc. — accrues that value based on the laws of supply and demand.

Some cryptocurrencies exist in limited supply. Bitcoin is a prime example. A bitcoin can only be “mined” if powerful computers solve complex mathematical problems, the solution for which produces a bitcoin.

Moreover, the bitcoin algorithm is limited. Once just south of 21 million bitcoins are mined, that’s it. There will never be another. Despite existing in the digital world of ones and zeros, bitcoin is a kind of “game” with a definitive endpoint. There will only be so many bitcoins mined, ever.

So … some cryptocurrencies are limited in their supply. What about demand? Why do people want cryptocurrency?

As you can probably guess, it is not because cryptocurrency is “useful” in any real sense. Historically, currencies were made of precious metals, which had inherent value for their beauty, malleability, and usefulness in fabrication. Other commodities that had inherent value included diamonds, oil, and salt.

In the end, cryptocurrency is only valuable because a community of people believes it is valuable and is willing to trade other assets for it.

In a way, it is actually no different from the fiat currencies issued by governments. The US dollar isn’t even backed by gold anymore. But we agree that the US government is powerful and has the right to issue currency … so we all use the US dollar in our transactions.

Can You “Invest” In A Currency?

When we think of “investing,” we think of stocks, bonds, real estate, gold, and other commodities securities. If a cryptocurrency is actually a “currency,” is it really something you can “invest” in?

The short answer is “yes.” Even fiat currencies increase and decrease in value according to the forces of supply and demand. Many people invest in currencies with the hope or expectation that they will increase in value relative to other currencies.

This is the essence of “foreign exchange” currency trading, or “forex” investing. Of course, forex is notoriously volatile. In that sense, cryptocurrency is par for the course.

In a sense, it isn’t that much different than investing in gold, silver, or other precious metals. These valuable commodities used to be the components of fiat currency coins. While fiat currencies rarely contain precious metals anymore, gold and silver remain popular investment vehicles.

So Is Cryptocurrency a Good Investment?

Whoever is right or wrong, here’s something that is hard to deny — if a stock index rocketed from $1 trillion to $2 trillion within four months, would anyone call it a “bad investment?”

Those kinds of numbers mean a lot of crypto owners have gotten rich — on paper. If they sell high in the market, they make a lot of money.

The demand for cryptocurrency is currently driven largely by hype … but the hype is strong. Otherwise, the cryptocurrency market would not have experienced the surges of 2018 and 2022.

Of course, it has also experienced crashes. Cryptocurrency is a volatile investment. But it is not the only volatile investment. Small-cap and medium-cap stocks also experience swings in value. But small-cap and medium-cap stocks have a key place in the strategy of aggressive and speculative investors. If you understand this going in and time your trades right, you can make a fortune.

Moreover, the hype is driven by major players. The Russian and Ukrainian governments have adopted cryptocurrency to some extent, while major corporations have invested substantially in cryptocurrency.

The best example of this is Elon Musk. Tesla’s February $1.5 billion bitcoin buy in February 2021, along with Musk’s accompanying tweet, helped fuel an already surging bitcoin. A rainmaker in the tech world, Musk also made several tweets about Dogecoin, a cryptocurrency founded as a joke. The value of Dogecoin has surged 14,000% since the beginning of the year.

For all the cryptocurrency cheerleaders, there are just as many detractors — smart financial minds who think cryptocurrency is a fool’s bet. Are they right?

Let’s talk about volatility. Yes, if you time your trades right, you can make a fortune. Get it wrong, and you could lose big. That’s Investing 101, not limited to cryptocurrency or bitcoin. But it can’t be ignored.

Blockchain technology is secure … on paper. In practice, bitcoin and other cryptocurrencies have been subjected to high-profile incidents of fraud and cybercrime. When your money is invested in data, the importance of data security cannot be stressed enough. Make sure the crypto platforms you trade on are secure.

Forget fraud, though … fortunes in cryptocurrency can be put at risk by simply forgetting a password, like the famous case of Stefan Thomas, who has two more guesses at his password before he is permanently locked out of his $220 million bitcoin account. Don’t lose your password!

Cryptocurrency currently enjoys very little regulation … but that could change. The governments of world powers are struggling to decide what to make of bitcoin and its sister currencies. If the regulatory hammer comes down, the crypto landscape could change drastically.

But the biggest weakness of cryptocurrency in the eyes of many financial experts is that it doesn’t do anything. You can’t make it into jewelry or circuitry. It isn’t equity or debt interest funding a company that provides essential or valuable goods and services. It’s just inert computer code. It has value because people agree that it has value, just like a fiat currency.

Crypto enthusiasts focus on the ways in which bitcoin and other cryptocurrencies are different than fiat currencies — private, decentralized, untethered to any government. To them, that’s its “use.” But if widespread crypto adoption stalls and the marketplace begins to sour on cryptocurrency, the party could theoretically come to an end.

The more entrenched crypto becomes in the economy and the public consciousness, the more it feels like it is here to stay … and deserves a place in more investors’ portfolios.