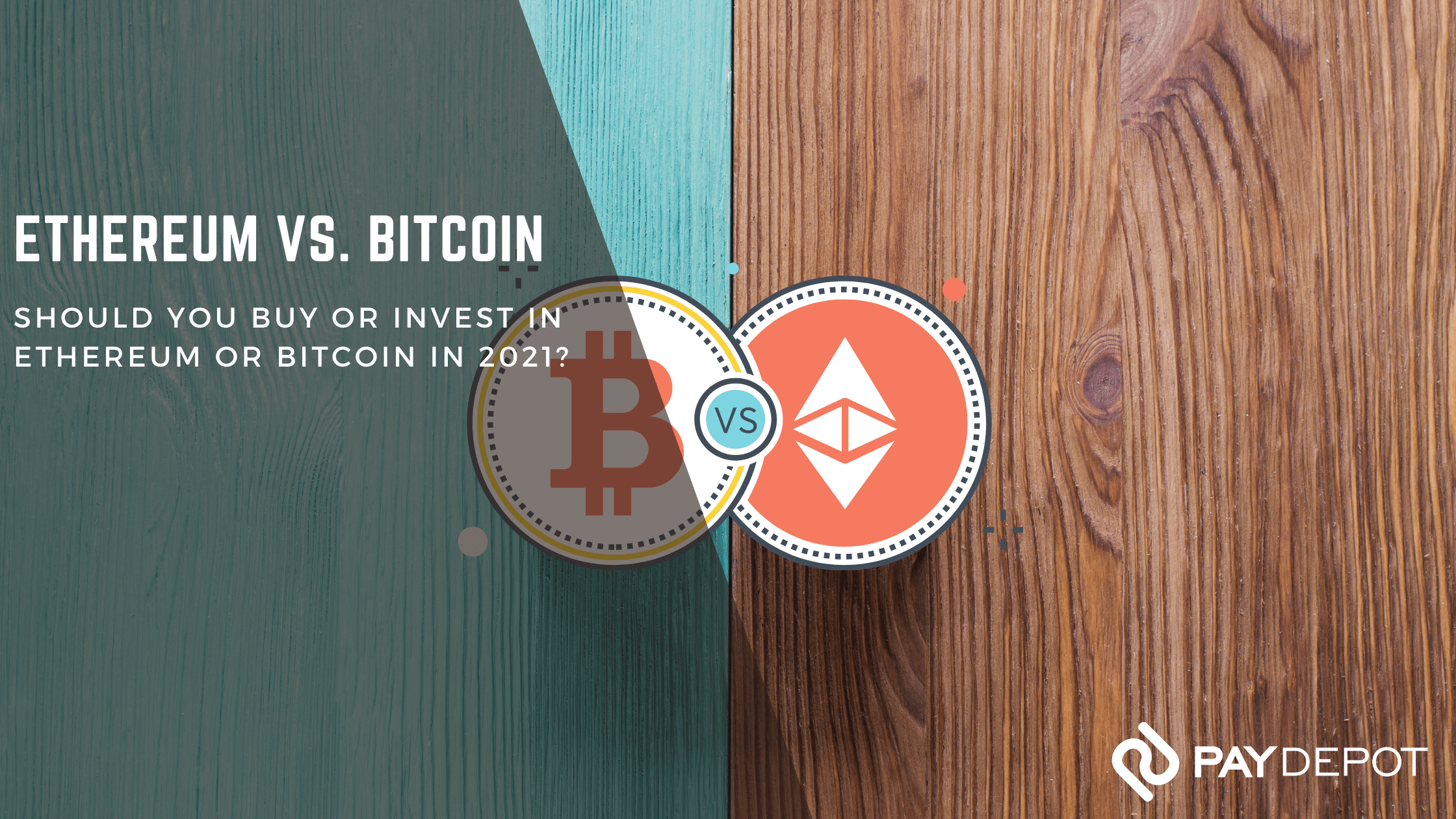 Bitcoin or Ethereum: which should you buy and invest in for the years to come? This is a question that many people have been asking themselves as they have seen the prices of both crypto go up and down over the past few weeks.

It can sometimes be a great advantage to purchase Bitcoin or Ethereum as they start to trend downwards because they're more accessible. However, if you don't have enough money to invest in both, which would be the better option?

In this blog post, we will explore all of the pros and cons of these two cryptocurrencies, so that you can make an informed decision about what to do with your money.

Before jumping into purchasing Bitcoin or Ethereum, you'll want first to understand the background between the two cryptocurrencies. Each has its own history and fluctuation in price, which is essential to understand before choosing one to invest your money in.

Bitcoin is a digital cryptocurrency that was introduced in 2009. It's decentralized, which means that it isn't controlled by any one person or company and is instead managed through blockchain technology—a public ledger of all the Bitcoin transactions ever made since its creation. It's recognized as the original cryptocurrency to receive popularity.

The History of Bitcoin

Bitcoin was created in 2008 by an anonymous individual, or group of people, under the name Satoshi Nakamoto. It was released as open-source software, so that anyone around the world could use it and contribute to its development without having anyone at a higher level of power. Unlike other forms of currency, there are no physical Bitcoins available for purchase.

Bitcoin price has fluctuated wildly over the years with periods where there's been significant growth and other times when Bitcoin saw sharp declines. For example, in April 2013 and November 2017, BTC prices surged from USD 100 per coin to more than USD 1200 before falling back down again in 2016.

Ethereum is a blockchain-based cryptocurrency that was introduced in 2015. The Ethereum network has a broader range of applications than Bitcoin and is also known for its use as an operating system (EthereumOS).

It enables the use of decentralized applications and smart contracts to be run and built without any issues or interference from third parties. This encourages developers to use, run, and build applications using their programming language.

The History of Ethereum

While the history of Bitcoin can be traced back to 2008 when Satoshi Nakamoto created it, there are many different stories and rumors about the birth of Ethereum. All that we know for sure is that Vitalik Buterin invented it after seeing what he considered flaws with BTC's model.

He saw what the potential could be and decided to hold Ethereum to the next level. Ethereum can be used for two purposes. First, it can run applications via the Ethereum network and be traded as a digital currency like other cryptocurrencies.

Bitcoin and Ethereum - Pros and Cons

﻿﻿Is Ethereum better than Bitcoin - the key differences

After reading the pros and cons of each cryptocurrency, you might be wondering if Ethereum is better than Bitcoin. Well, it really depends on what you're looking for in a cryptocurrency.

Are you looking for a low entry point? If so, then Ethereum might be the better option because of its lower buy-in costs. However, suppose you're more interested in investing your money. In that case, Bitcoin might work out to be a better investment since it has been shown that these coins are able to retain their value over time and have proven less risky than other currencies available on the market today.

What type of investor are you? Is there an industry where ETH would prove helpful or beneficial to use as a currency? Do any specific cryptocurrencies interest you outside of BTC and ETH already outlined within this post? These questions can help determine which is right for you to invest in. Since the two cryptocurrencies are so different, narrowing down your needs will help you choose the best route for purchasing the right Cryptocurrency.

Ready to start investing? If you've decided which cryptocurrency to invest in, purchasing Bitcoin or Ethereum through Paydepot is a great option. At Paydepot, we make it easy to buy the crypto of your choice, whether you want to purchase online or find a Bitcoin ATM to purchase with cash.

FAQ on Buying and Investing in BTC and ETH

1. How can you invest inBitcoin or Ethereum?

If you're looking to invest in Bitcoin or Ethereum, you're first going to need to have a wallet. This is where your coins will be stored and protected. You won't have access to them until it's opened on a computer or mobile device. Once you have a wallet, you can use an online source, like Paydepot, to purchase your crypto of choice.

2. What is the difference between Bitcoin and Ethereum?

The main difference between the two cryptocurrencies is that BTC has been around much longer than ETH. However, there are still more buy-in opportunities for those who purchase Ethereum due to its low price. However, if you're looking at investing in something long-term, BTC might prove to work out better due to its slower inflation rate through mining.

3. What is an Ethereum or Bitcoin investment?

An Ethereum or Bitcoin investment is a way of investing in either cryptocurrency, which means that you're buying and selling the coins on the market.

Paydepot does not sell cryptocurrencies, but we make it easy to purchase BTC or ETH through our site with cash at an ATM near you. If you've decided to buy online, this transaction will be completed within minutes after entering your details securely.

5. Ethereum vs Bitcoin: Which is winning?

Bitcoin is currently the top dog when it comes to cryptocurrencies. It has been around for a while, but Ethereum might be taking over in terms of market share and possible dominance down the road. However, both consistently tend to fluctuate in value, and both tend to have positives in different aspects.

6. Bitcoin vs. Ethereum: Which should I invest in?

If you're looking to invest in either Bitcoin or Ethereum, it really depends on what your needs are and why you want to buy the cryptocurrency. For example, if you're more interested in a low entry point with less risk, then ETH might be better for you. But, suppose you want something that is going to retain its value over time and has proven safer than other currencies available on the market today. In that case, BTC might work out better as an investment opportunity.

As of right now, there isn't one single currency that's considered best by all standards since they differ so much from each other. However, both options will give investors different opportunities depending on which type of investor they are through how they choose to use it.

7. Bitcoin vs Ethereum: Which rises faster?

Bitcoin and Ethereum rise in value at different rates. With Bitcoin, it is generally slower but has proven to retain its value over time when other currencies have lost theirs. However, with ETH, the price fluctuates a lot more—sometimes rising fast and then falling just as quickly.